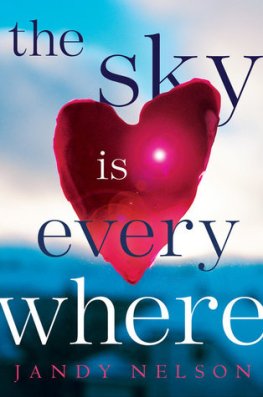 Adrift after her sister Bailey’s sudden death, Lennie finds herself torn between quiet, seductive Toby—Bailey’s boyfriend who shares her grief—and Joe, the new boy in town who bursts with life and musical genius. Each offers Lennie something she desperately needs… though she knows if the two of them collide her whole world will explode.

Join Lennie on this heartbreaking and hilarious journey of profound sorrow and mad love, as she makes colossal mistakes and colossal discoveries, as she traipses through band rooms and forest bedrooms and ultimately right into your heart.

As much a celebration of love as a poignant portrait of loss, Lennie’s struggle to sort her own melody out of the noise around her is always honest, often uproarious, and absolutely unforgettable.

The Sky is Everywhere is a book that I have been wanting to read for the longest times. It had been on my TBR even before I’ll Give You the Sun came out. I had high hopes because after all, it’s a Jandy Nelson novel. However, when I started reading, I was kind of disappointed because it wasn’t quite as I imagined it to be. Thankfully, the ending salvaged the book for me.

My main problem with this book is not the love triangle per se, but lying, as well as cheating in a way. Okay, so technically it’s not cheating because she’s not official with any of those guys, but she promised Joe that it was nothing, yet she still kissed Toby every time she saw him. And I do get the part about the grief and understanding each other, but I just don’t know if it’s realistic that they both love other people but keep on getting back together. It’s kind of a hard concept to grasp for me, and it affected my reading experience because it went on for most of the book. However, I really liked how the author resolved this in the end.

The Sky is Everywhere encompasses so much within a 300-page novel. I’m still debating whether or not I like it. I mean, it’s about friendship, family, relationships, love triangles, musical band, dead sister, lost mother, cool uncle, grandma with her own issues, Toby, Joe, Joe’s family background, Sarah, etc. I kind of feel out of breath just enumerating all those. I learned so much from this book though, but at the same time it’s kind of hard to grasp everything at the same time. And as a result, I think some of these aspects were not fully explored.

Negatives aside, there were things I liked about this book as well. I love how kind Uncle Big is, and how in touch with his emotions he is. People often have misconceptions about big guys, but he’s a softie who loves love. I also love how Gram has her own issues that she’s fighting with because grandmothers in novels don’t really have much stories to them. Although a bit late into the novel, I connected with the characters and the story. I may even have shed a few tears towards the end when Lennie talked to Gram, and then to Joe. I liked the way it tackled grief in a sense that it lingers. How you might forget for a while but it comes back in waves. I felt like that was realistic.

Overall, this book was not what I expected, which kind of affected my liking of the book. However, I was finally able to connect and understand the characters towards the end of the novel.

3.5 not what I expected stars

Hi, I'm Kim! I'm Chinese, though I was born and raised here in the Philippines. I've been reading books since I was in fourth grade and I've been blogging since December 2012. I love reading both YA novels, and my favorite genre is Contemporary. I rarely read dystopian, aside from my obvious favorite of course - Divergent. I used to not like Fantasy, but after reading Throne of Glass, I am a changed person. ;) I love meeting new people, so feel free to talk to me anytime via comments or Twitter! (@DivergentGryffi)

For authors, publishers:
I would love to review the said genres, and the preferred copy is paperback, though eGalleys are fine. You can contact me at offashionandbeauty@gmail.com and look at my Review Policy for more info.

Join 606 other followers on Bloglovin'!
Follow Divergent Gryffindor on WordPress.com