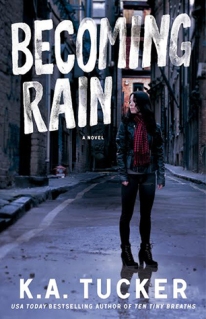 Luke Boone doesn’t know exactly what his uncle Rust is involved in but he wants in on it-the cars, the money, the women. And it looks like he’s finally getting his wish. When Rust hands him the managerial keys to the garage, they come with a second set—one that opens up the door to tons of cash and opportunity. Though it’s not exactly legal, Luke’s never been one to worry about that sort of thing. Especially when it puts him behind the wheel of a Porsche 911 and onto the radar of gorgeous socialite named Rain.

Clara Bertelli is at the top of her game—at only twenty-six years old, she’s one of the most successful undercover officers in the Washington D.C. major crime unit, and she’s just been handed a case that could catapult her career and expose one of the west coast’s most notorious car theft rings. But, in order to do it, she’ll need to go deep undercover as Rain Martines. Her target? The twenty-four-year old nephew of a key player who appears ready to follow in his uncle’s footsteps.

As Clara drifts deeper into the luxurious lifestyle of Rain, and further into the arms of her very attractive and charming target, the lines between right and wrong start to blur, making her wonder if she’ll be able to leave it all behind. Or if she’ll even want to.

I received an ARC copy in from the publisher through Netgalley in exchange for an honest review.

I requested Becoming Rain mainly because I read Burying Water, although by the time that I started reading this, I already forgot most of the details from Burying Water, which is a total fail. I must say though that I like this book better than the first one. This one has more excitement and feels and I just really enjoyed this one better.

“Such a precious sun it is, the one that shines after a cold, harsh rain.”

This book was a really fun read to me since I’ve never read a book about an undercover Fed before. Also, I just love romances wherein you are not supposed to fall in love with each other but do! I find it cute and entertaining watching the characters battle their feelings for each other. I was also happy to see Jesse and Alex in this book again.

This book is weird because I enjoyed the book, but I had a very hard time writing the review because I have nothing else to say rather than I liked it.

Hi, I'm Kim! I'm Chinese, though I was born and raised here in the Philippines. I've been reading books since I was in fourth grade and I've been blogging since December 2012. I love reading both YA novels, and my favorite genre is Contemporary. I rarely read dystopian, aside from my obvious favorite of course - Divergent. I used to not like Fantasy, but after reading Throne of Glass, I am a changed person. ;) I love meeting new people, so feel free to talk to me anytime via comments or Twitter! (@DivergentGryffi)

For authors, publishers:
I would love to review the said genres, and the preferred copy is paperback, though eGalleys are fine. You can contact me at offashionandbeauty@gmail.com and look at my Review Policy for more info.

Join 606 other followers on Bloglovin'!
Follow Divergent Gryffindor on WordPress.com